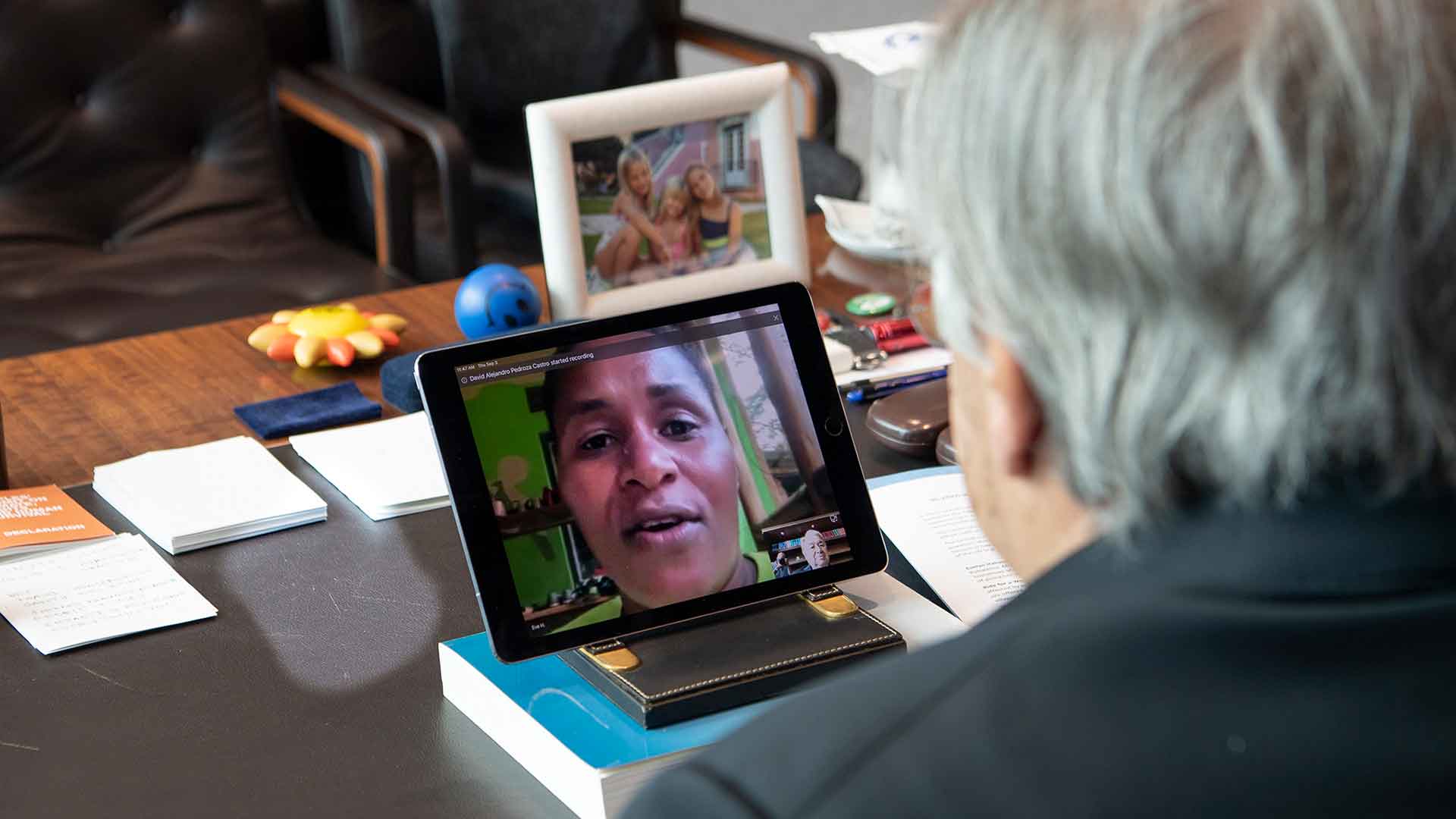 The EM-DAT database covers data on more than 21,000 disasters from 1900 until the present. It aims to record all disasters in which either 10 or more people died, or 100 or more people were affected, or which entailed the declaration of a state of emergency or a call for international assistance.

The database is searchable by users and can provide information on disasters and their impact in each country, region or continent. The search tool is effective and can yield details of types of disaster (classified into natural and technological, with several sub-types for each) and the impact of each of them in terms of death, injuries, numbers of people rendered homeless, total numbers affected, and the economic cost of each disaster.

It is a valuable tool for journalists.

EM-DAT is the Emergency Events Database maintained by Université Catholique de Louvain (UCL) in Brussels, Belgium. It is located online at: emdat.be

Below is a list of 10 disaster-related patterns and trends that you should know before reporting on a disaster risk reduction story.

Please note that most of the figures given below have been averaged out over several years as mentioned below, and these average figures are affected by large-scale disasters such as the Indian Ocean Tsunami of 2004 or the Haiti earthquake of 2010. Each of these disasters killed hundreds of thousands of people, which affects annual and decadal averages.

Earthquakes, storms, epidemics and floods claim the most lives

Different continents face different conditions, depending on which types of disasters are most prevalent. In Asia, the highest death toll was due to earthquakes (489,901 from 2000-2019), whereas in Africa, epidemics were the biggest killers, taking 86,862 lives.

As cities continue to grow and as more people crowd into poorly built housing settlements, the trend of earthquake-related deaths will probably continue to rise. It is expected that the number of people exposed to cyclone and earthquake risks in cities in developing countries will double by 2050.

The numbers affected by disasters can vary from year to year – large-scale disasters can affect the health, livelihoods and habitats and tens of millions over a short period and tolls obviously spike when those happen. The COVID-19 pandemic, for instance, will have affected the vast majority of the world’s population in some way or the other before it comes to an end, and will cause immense economic damage on a scale seldom seen before.

Climate- and weather-related disasters affect the most people

Climate change has emerged as a major risk amplifier across the world and is increasingly leading to disasters that impact billions of people. As the effects of global warming make their presence known, this can only increase.

More than 90% of the disasters recorded by EM-DAT between 2000 and 2019 are climatological (droughts and wildfires) hydrological (floods) and meteorological (extreme temperatures and storms). Biological (such as epidemics and infestations) and geological (e.g. earthquakes and tsunamis) disasters make up the rest. But in terms of the number of people affected, climatological, hydrological and meteorological disasters account for about 96.6% of the disruption between 2000 and 2019.

More people are living in climate risk hotspots. Of the 33 cities that have at least 8 million residents today, 21 are in coastal areas. Coastal flooding is expected to increase rapidly due to sea level rise and weakening of coastal ecosystems such as coral reefs impacted by sea temperature rise.

Asia is the continent most at risk

Asia continues to bear the brunt of disasters with more frequent weather-related events and greater numbers of people killed and affected than any other continent. Between 2000 and 2019, Asia accounted for 41% of all disasters. More than 57% per cent of global deaths and about 85% of the people affected anywhere in the world were in Asia – in all, 863,297 Asians died and about 3.4 billion were affected over these 20 years. In terms of country, China and India reported the highest numbers of weather-related disasters during this period.

According to Oxfam, the number of people exposed to coastal flooding in Asia is expected to increase by 50 per cent by 2030.

The poorest people and countries suffer the most

The poor are more affected by disasters than any other economic group. This holds true both in developing and developed countries. They are more vulnerable, and their capacity to bear risk is low. They suffer the greatest long-term consequences of disasters as they may have no insurance and no means to recover quickly; they often lose their homes, jobs and livelihoods, which in turn makes them more vulnerable to the next disaster. For instance, it is estimated that 35.6% of the population affected by floods in Pakistan in 2010 slipped under the poverty line as a result of the disaster (ESCAP 2017b from GAR2019).

Poorer countries can find themselves unable to cope with large disasters, lacking the means to respond effectively during and after the disaster. The losses can overwhelm their economies. In Central America and the Caribbean, the earthquakes of Guatemala (1976), Nicaragua (1972), El Salvador (1986) and Haiti (2010) caused direct economic losses of approximately 98%, 82%, 40% and 120% of the nominal GDP of each country, respectively. (GAR2019)

Unlike disaster occurrences, the pattern for death tolls is very different when the income level of each country is taken into account. Since 1990, 92% of the deaths attributed to internationally reported disasters have occurred in low- and middle-income countries (GAR 2019).

As more poor people concentrate in urban slums, the numbers of people vulnerable to disasters will also increase. Three billion of the world’s people live in poverty on less than US$2 per day and 1.3 billion on less than US$1 per day. According to UN-Habitat, by 2030, nearly 3 billion people will live in slums.

Women, children, aged and disabled people are among the most vulnerable

Women and children are 14 times more likely to die than men during a disaster, according to the International Union for Conservation of Nature (IUCN). In industrialized countries, more women than men died during the 2003 European heatwave, and many more African-American women were affected by Hurricane Katrina in 2005 than men. In many countries, women have subordinate positions, restricted mobility, less educational opportunity, less voice in decision-making and poorer employment, all of which increases vulnerability.

Older women were among the most affected during the 2011 Great East Japan earthquake. Among the 13,007 fatalities in Iwate, Miyagi, Fukushima -- the country's three most affected prefectures; 56.1% were aged 65 or over, and most were women according to the Japanese National Police Agency (NPA).

There has been some progress with women and children and disabled people vis-a-vis awareness raising and preparedness. But as long as these groups continue to be largely excluded from disaster risk reduction decision-making and education, no real progress will be achieved.

Tens of thousands of small-scale disasters occur each year throughout the world because of flooding, landslides, fires and storms, but are not necessarily reported or recorded in international databases.

The impact of small disasters can be just as damaging as large ones, and even more so for poor people, causing injury and death, undermining livelihoods and leading to chronic poverty. Low-intensity events, such as recurrent floods rarely attract media interest and are poorly documented, but they can have significant cumulative impacts.

Small-scale disasters are often unreported but have an increasingly huge impact on development and poverty.

For every $100 spent on development aid, just 40 cents are invested in preventing disasters

Disaster Risk Reduction has been at best a low priority. A study by Jan Kellett and Alice Carivani shows that in the period 1991–2010, the total quantum of aid provided by the international community was more than $3 trillion. Of this, $106.7 billion was allocated to disasters, and within that, only $13.5 billion was for risk reduction measures undertaken before disasters strike. Larger sums were allocated to other aspects – $23.3 billion was spent on reconstruction and rehabilitation and $69.9 billion on response.

Of overall aid financing over those 20 years, the $13.5 billion spent on DRR accounts for just 0.4% of the total quantum of international aid. Essentially, for every $100 spent on development aid, just 40 cents were invested in defending that aid from the impact of disasters (Source: Financing Disaster Risk Reduction, Jan Kellett and Alice Carivani, 2013). According to UN figures, in 2014, just 0.4% of the global aid budget of $135.2bn roughly $540m was spent on reducing disaster risk.

Disaster risk reduction is often seen as a long-term solution, whereas in reality it serves another purpose as a short-term solution with immediate returns that can considerably reduce poverty, climate change impacts and disaster risks. DRR is not about asking for more money but for using development and humanitarian aid money in different way.

With contributions from Sigrid Owen (module presenter), and Savyasaachi Jain and Megan Rowling, who updated “Disasters from a different angle: a DRR guide for reporters,” originally published by UNDRR in 2006.